A few days ago, I posted some text written by Maria Viner (find it here) about how one of my works from 2013 had affected her, and ultimately helped her deal with the postnatal depression that had troubled her since the tragic loss of her first son William.

In around 2013 I did an artwork on a frosted window in Shoreditch, and thought nothing about what it meant, or could potentially mean in the eyes of viewers. When creating a piece, I try to consider things like meaning and content as little as possible, preferring to create whatever flows from my subconscious freely, whilst making something that is also open to interpretation at the same time.
In the past, the content of my work was much darker (perhaps a reflection of my subconscious – who knows), and often contained elements that were a counter to the more tranquil aspects of the work. In this particular piece (retroactively titled W.R.V. after Maria’s lost son), I drew a woman sat within a lavish interior, with a small coffin behind her to her side. 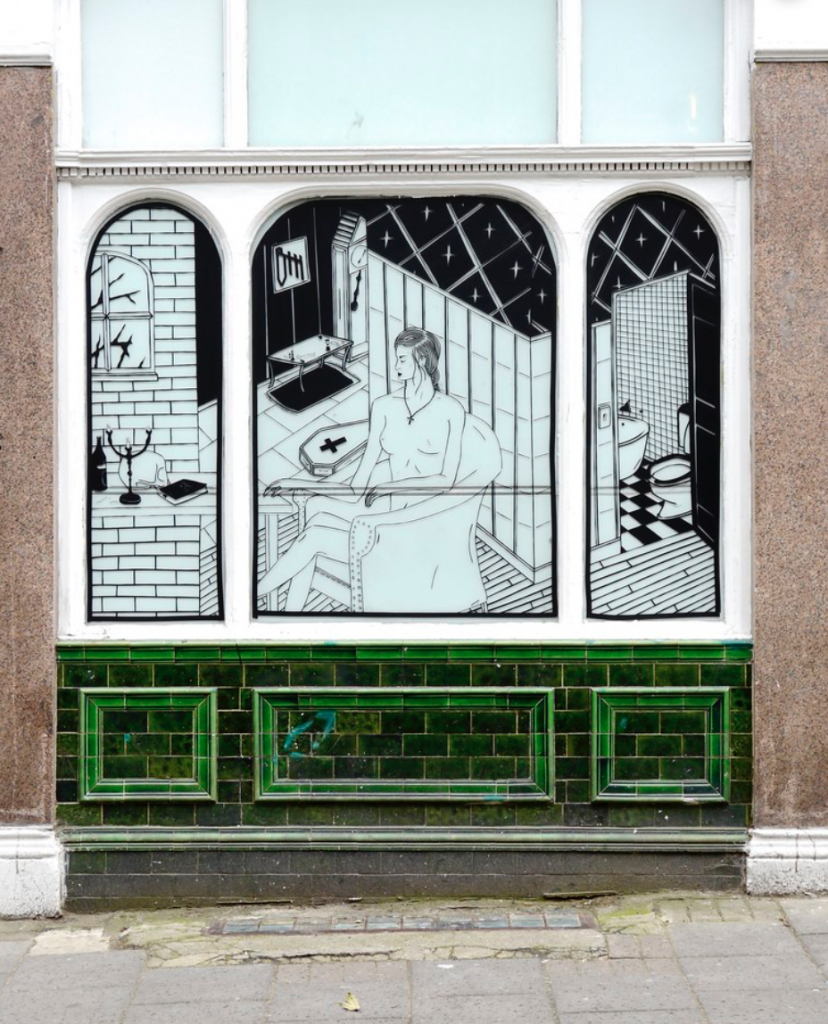 Today, the content of my work is even less direct in terms of content and subject-matter, and I aim to leave the works even more open to interpretation by omitting the darker elements. Perhaps the interpretations of my current work is similar to that of my earlier works, but I try to have even less influence over this by my omission of such things.

The response from Maria to this work is incredibly moving, and I am so unbelievably grateful to Maria for sharing her story. I am more honoured and touched by her response to this piece than I have been to anything else in my career. To have been able to help her in some small way, is more than I could ever have hoped for my work.

I was incredibly lucky for my work to have such a positive response, and it’s hard for me to see this as being entirely deserved on my part. What is amazing about art and its ability to resonate emotionally with people, is that this is often something that happens without the direct influence of the artist. If I were to realise that Maria would see the work, I would have been much more careful about the content – but interestingly, were I to make such changes, it wouldn’t have had the affect it did.

In the years since Maria first contacted me we have chatted occasionally, and I have seen how she has used her past experience to help so many people. From her tireless work for the charity Mothers For Mothers, to her constant lecture tours around the country, sharing her story to inspire others, and let them know that they are not alone.

My work may have triggered some realisation in Maria’s mind, but all of the hard work, strength, and love were her own. It is not to me that Maria owes this gratitude, but to herself.

Maria also commissioned me to complete a portrait of William, from a photo that was taken of him in the hospital shortly after he died. The gravity of the portrait, and the responsibility to do it with the requisite amount of delicacy, was not lost on me. I included pattern and details in the background of the piece that were of symbolic resonance with the family, and tried to make the piece as personal to them as possible. Maria plans to write something about that piece too, and has asked me to publish that here in February, to coincide with William’s birthday.

If you are at all moved by Maria’s story, or you would like to help in any way, you can find the charity’s details HERE