Today is my first ever exhibition anniversary! My first ever show was on October third in 2012, and started this whole whirlwind of a journey off for me. It was a charity exhibition in aid of Anti Slavery International, and was at Village Underground in Shoreditch.

This was my first show since leaving university that wasn’t in a bar or cafe, which I did a lot of whilst studying for my masters degree in contemporary fine art. Following this, I moved to London and started working in a gallery. It was there that I met the two girls from Anti Slavery International who got me involved in the show.

Overall the show raised over £27,000 for the charity, and I met some artists who have stayed firm friends to this day.

As well as putting a piece into the show, I was also asked to come up with something big that would get the show some press attention. I took this incredibly literally and suggested a nine-storey high tape drawing up the side of this NCP in Shoreditch. The charity then contacted the carpark, had a lot of meetings, circumnavigated a lot of red tape, and eventually I was able to do the piece. 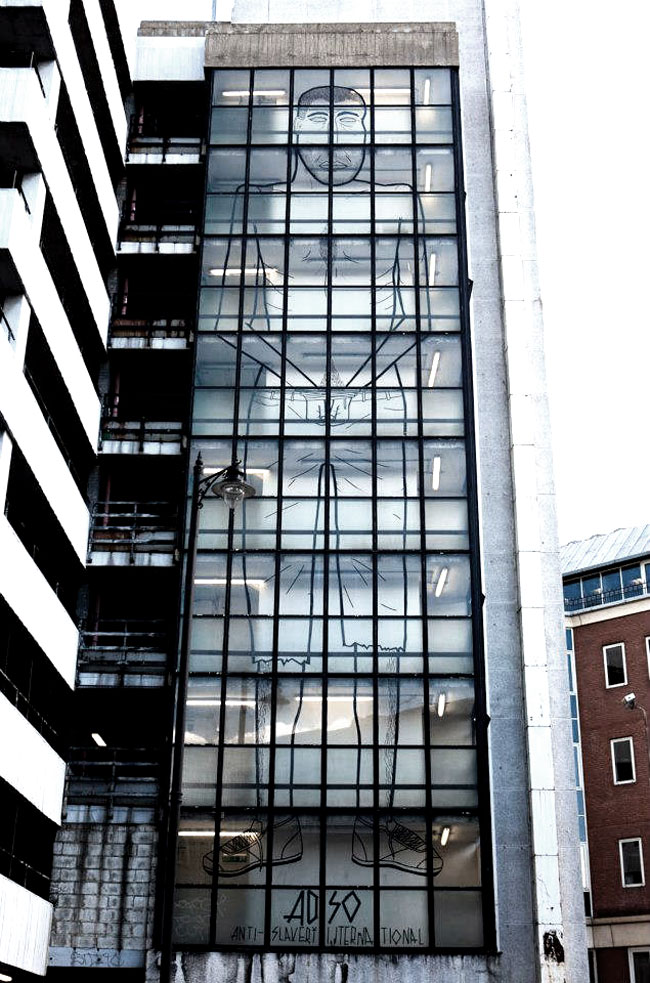 I got there on the day of the install not really knowing how I was going to pull it off, as I had to do all of the drawing on the inside of the glass. I sketched it out on the back of a Pizza Express menu, and got to work. I had to draw the top part of the head on one floor and go down the stairs to the next to continue the face, which was a complete nightmare.

This piece got a lot of press, and is probably the reason I started getting asked to put my work into shows.